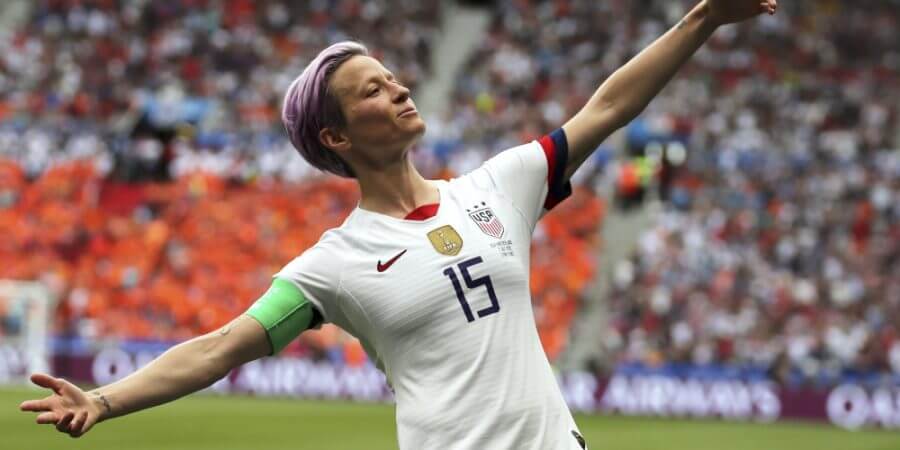 On July 7, 2019 the United States Women’s Soccer team won their fourth World Cup in eight years. Their hard-earned victory has sparked many conversations. The appalling pay discrepancy between the men’s and women’s teams has been a frequent flyer. Another is the now iconic image of co-captain Megan Rapinoe throwing her arms out in pride and celebration. With a seemingly simple gesture, Megan became the center of a firestorm of criticism. Why? Because she dares to take up space.

In an excellent article posted in the International Journal of Feminist Approaches to Bioethics, Alison Reiheld explores and breaks down the social stigma of women who dare to take up space.  The world tells us to make ourselves smaller in the ways that we stand, sit, eat, dress, play sports, walk, talk, and exercise. We joke about “manspreading,” but censure women who don’t cross their knees when they sit. We admire men who work out to develop their muscles, but warn women not to lift heavy weights lest they get “bulky.” Women are, on average, smaller than the average man. Yet we are constantly told to make ourselves smaller still.

Taking up space is an act of power

And why is that?

Because someone stands to gain by us not flexing our mental, emotional, and physical muscles to their fullest. Women should be modest, we are told. Being proud of yourself is vanity. It is unseemly. Keeping ourselves small robs us of our full strength. From experiencing the fullness of life in all our glory. From fully knowing, embracing, and celebrating who we are.

Look at the volume of criticism leveled at Megan Rapinoe for celebrating a victory that she has rightly earned. The clamor about her obvious and unconstrained pride in herself and her team is entirely intended to shame her for owning her power. Her critics want her to her make herself smaller, quieter, more meek, and more modest. They cannot stomach her loving herself and her team. They cannot tolerate her not needing anyone’s permission to love herself.

What does that tell you about why they need her to be small?

Taking up space is an act of rebellion

You may have also received messages about taking up space emotionally. When a parent has little capacity for empathy, they cannot tolerate their child’s distress, grief, anger, or differentiation. When a child begins to pull away and become more independent, it triggers fear and anger in the parent. They become quick to slap down any attempts to develop autonomy or extend beyond what the parent sees fit.

Narcissistic families struggle to accept anyone but the narcissist as needing to take up emotional space. The family’s attention and energy are skewed toward the loudest need. Anyone else who dares to take up space is criticized, mocked, rejected, or ignored. Those messages may be overt – like making fun of a child who cries in frustration or scolding an adult child for not letting go and moving on. They may also be more subtle, such as turning away from a family member in distress and silently ignoring their pain.

Now imagine that you have achieved a personal success or victory. You might expect your family to be your biggest cheerleaders, right? But in a narcissistic family, successes also take up space. And that is unacceptable. Taking pride in our accomplishments, no matter how great, is boastful. You should wait for someone else to recognize and celebrate you. The problem with that is that in a narcissistic family you may be waiting forever. If your narcissist does recognize you, it may be only so they can claim credit for your success. Or they may downplay your accomplishments to maintain their position at the top.

Taking up space is an act of joy

You are here. You occupy space. And you don’t need to apologize for that.

When we choose to consciously, confidently inhabit the space that we fill, we unleash the capacity for deep joy. Owning and celebrating our space is an act of fierce acceptance. It is an act of pride, self-love, and defiance. It is a rejection of constraint, control, and condescension. To take up space is to choose joy.

If you have been shamed for taking up space, you can reject that. Expand to touch every inch of your space. It is yours to fill.

If you have been punished for celebrating your gifts, you can reject that. Be proud of what you have to offer. It is yours, and yours alone.

If you have been told there is no room for you, you can reject that. Take up room. There is enough for you among those who recognize your worth and value.

The best and most compelling athletes are those who command the space they move through. What would it be like to take joy in the space you fill? To feel exuberant instead of apologetic as you move through the world? To take delight in what you bring to the table instead of bowing to pressure to hold back and be small?

How can you find joy in yourself, and the space you hold, this week?