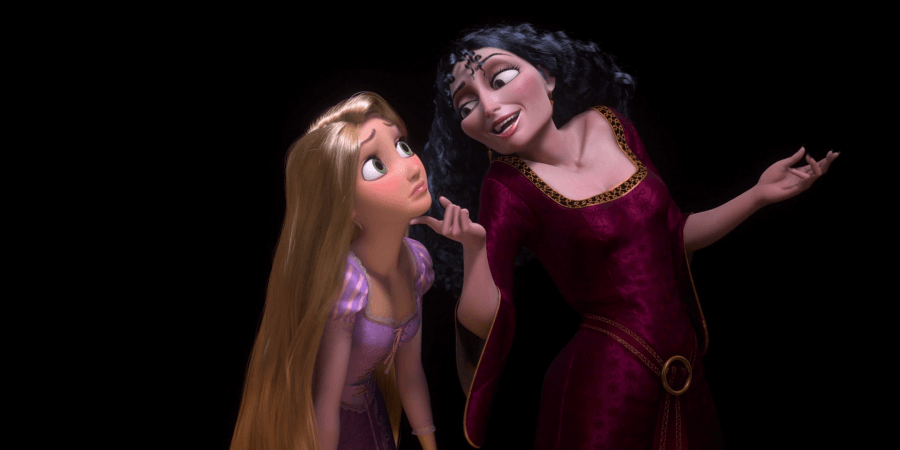 A: Mother Gothel in Disney’s Tangled.

In this re-telling of the classic Rapunzel story, Mother Gothel is a narcissistic, emotionally abusive sorceress who abducts the infant Rapunzel from her crib. Mother Gothel raises Rapunzel as her own, isolating her in a hidden tower to control Rapunzel and her magical hair.

el and her emotionally abusive mother may feel familiar to those who grew up in a manipulative or narcissistic family. Let’s take a look at some of the ways this story shows the reality of narcissistic parenting in action. This article (part one of two) will focus on Mother Gothel’s behaviors, beliefs, and actions.

Very early in the movie, Rapunzel asks to go see the floating lanterns that appear every year on her birthday. Mother Gothel responds with a melodramatic song called “Mother Knows Best,” which is peppered with passive-aggressive insults, fear-mongering, and guilt-tripping. 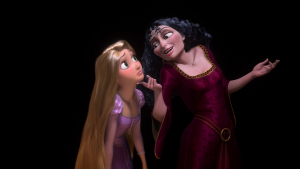 In the song, Mother Gothel belittles Rapunzel, minimizing her capabilities and painting a picture of the world as a terrifying place. She preys on Rapunzel’s fears and ignorance to keep her under Gothel’s influence. The song is quite effective, driving Rapunzel back into Mother Gothel’s arms in terror at the end.

“Mother Knows Best” is a perfect example of a narcissist’s tendency to set establish him or herself as the ultimate authority, as well as a gatekeeper. The world is unsafe, Gothel sings, and only she can protect Rapunzel from its dangers. Narcissistic parents train their children not to trust their own senses or instincts, and that the parent’s perspective overrides the child’s.

Gaslighting is a tactic used by narcissists and other manipulative people to make their victims question their perception of reality. Throughout the movie, Mother Gothel gaslights Rapunzel with a casual laugh and a dismissive handwave.

When Rapunzel asks about the lanterns in the sky, Mother Gothel calls them stars and ignores Rapunzel’s intricately drawn star-charts. She scoffs when Rapunzel expresses her (accurate) belief that another character cares for her, calling Rapunzel demented. And when Rapunzel returns to her tower near the end of the movie, Mother Gothel removes the evidence of Rapunzel’s brief period of freedom.  She smiles as she says, “It never happened.”

By making her question herself constantly, Mother Gothel keeps Rapunzel emotionally off-balance and insecure. Narcissistic parents may deny their children’s memories, or accuse them of “reading into” things or “taking it the wrong way.” Adult children of narcissists often find it hard to trust their own feelings after being told they were wrong for many years.

Mother Gothel’s interactions with Rapunzel are characterized by backhanded “compliments,” passive aggressive comments, and cruel jokes at Rapunzel’s expense. She then rolls her eyes or becomes annoyed when Rapunzel shows any sign that these “jokes” hurt her feelings.

At one point, Mother Gothel appears to show gratitude for the effort of Rapunzel using her hair to lift her mother in and out of the tower. When Rapunzel smiles and says it’s nothing, Mother Gothel pats her cheek and sing-songs “Then I don’t know why it takes so long!”  She then waltzes off with a laugh and a “I’m just teasing!” The initial show of appreciation followed by the not-so-subtle dig leave Rapunzel confused and unsure of herself.

Children of narcissists often learn to smile even when they are the butt of a joke. Showing offense or hurt to a narcissistic parent often leads to dismissive comments like “Oh I was just kidding! You need to lighten up.” It is salt in a wound to first make a hurtful comment and then claim that the butt of the joke simply needs a better sense of humor.

4. An excessive need for praise, admiration, and recognition

Narcissistic parents often expect praise and admiration for even mundane or expected behaviors. They need to be admired, even if it means hurting someone else. A example of this comes early in the movie, when Mother Gothel looks into a mirror at herself and Rapunzel.

Mother Gothel smiles fondly as she observes a “strong, confident, beautiful young lady” in the mirror. Rapunzel begins to smile, thinking Gothel is giving her a compliment. To Rapunzel’s acute embarrassment, Mother Gothel quickly clarifies that she was referring to herself. Rapunzel cannot share the spotlight, as Mother Gothel needs all of the attention.

In narcissistic families, there can be a competitive aspect to a parent-child relationship. Narcissistic parents may value their children’s achievements, talents, and accomplishments, but only if those virtues reflect well on the parent. A common phrase in these homes might be, “Everything good about you comes from me!”

5. Valuing people for what they provide, not for their inherent worth

Narcissistic parents value relationships based mostly on what a person can do for them rather than the person’s inherent worth. Mother Gothel kidnapped Rapunzel to have constant access the girl’s magical hair, which provides a service to her by maintaining her youth and vitality. She is the most loving when Rapunzel is compliant, docile, and submissive. When Rapunzel resists, Mother Gothel quickly withdraws affection and becomes cold, threatening, and spiteful.

Mother Gothel does not value Rapunzel for her intelligence, artistic skill, kindness, humor, or charming personality. She values Rapunzel for the power of her hair, and is willing to kill to preserve her access to it. Rapunzel’s wishes and personhood are irrelevant. It is truly sad that Mother Gothel misses out on having a real relationship with a thoughtful, loving, and loyal daughter because she can’t see past Rapunzel’s magical hair.

Tangled provides a clear depiction of a narcissistic and emotionally abusive relationship. Fortunately for Rapunzel, she is eventually able to escape the relationship and find love. Check back here for part two in this mini-series, in which we explore the relationship from Rapunzel’s side!